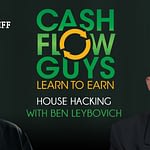 0.75x
1x
1.25x
1.5x
2x
0:00
00:49:42
Apple PodcastsGoogle PodcastsPlayer EmbedShare Leave a ReviewListen in a New WindowDownloadSoundCloudStitcherSubscribe on AndroidSubscribe via RSSSpotifyCheck out the podcast on iTunes
Subscribe to The Podcast

Today I’m joined by Ben Leybovich, a real hands-on investor, owner of “JustAskBenWhy.com”, contributor to Bigger Pockets, and author of “House Hacking”. I’ve been a HUGE fan of Ben’s for years now since I began my real estate investing career (again), and I am beyond excited to have him joining us today.

Ben is one of my favorite people because he backs up his knowledge with REAL ACTION. In today’s market saturated by “guru theorists”, that is a rare feat and one that needs to be celebrated and repeated as often as possible. Ben was formally a concert violinist and also suffers from Multiple Sclerosis (MS), which can cause pain daily for sufferers. Despite this diagnosis, Ben made the choice to charge forward in his investing career rather than let the disease bring him down.

Ben has also created a system, named by his friend Brandon Turner, “House Hacking”. This concept is meant to create a lifestyle you’ve dreamed of now without the traditionally deferred gratification of a 9 to 5 job, trudging toward retirement. He’s changing the traditional mindset of “How can I afford this thing?” to “How can this thing pay for itself?”

To learn more about Ben and the House Hacking method and book, visit him online at JustAskBenWhy.com.

Don’t forget to join our Facebook group at CashFlowGuys.com/Group.