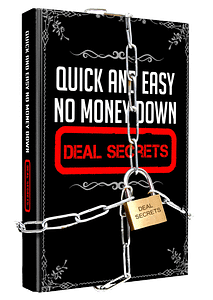 Quick and Easy No Money Down Deal Secrets

This book uncovers the most guarded investment secrets of top producing Real Estate Investors!  These strategies are simple to use, can be put into action quickly and will result in you getting more deals done faster than ever before so you can rest easy knowing you will never have to beg anyone for money to help you do real estate deals.

GET YOUR FREE COPY HERE!

Rich Dad’s CASHFLOW Quadrant is a guide to financial freedom. It’s the second book in the Rich Dad Series and reveals how some people work less, earn more, pay less in taxes, and learn to become financially free. CASHFLOW Quadrant was written for those who are ready to move beyond job security and enter the world of financial freedom. It’s for those who want to make significant changes in their lives and take control of their financial future. Robert believes that the reason most people struggle financially is because they've been spent years in school but were never been taught about money. Robert’s rich dad taught him that this lack of financial education is why so many people work so hard all their lives for money… instead of learning how to make money work for them. This book will change the way you think about jobs, careers, and owning your own business and inspire you to learn the rules of money that the rich use to build and grow their wealth.

How to Win Friends and Influence People

How to Win Friends and Influence People by bestselling author Dale Carnegie gives you time-tested advice and simple techniques on how to deal with people, understand them and get along with them. This book tells you how to: • Improve your conversation skills • Avoid arguments and win people over • Make friends easily • Become a people person A phenomenal success that has sold millions of copies worldwide, this book will change the way you approach relationships and better equip you to handle life's situations.

This book will teach you how to:

The Advanced Guide to Real Estate Investing: How to Identify the Hottest Markets and Secure the Best Deals (Rich Dad's Advisors (Paperback))

If you're interested in real estate investing, you may have noticed the lack of coverage it gets in mainstream financial media, while stocks, bonds, and mutual funds are consistently touted as the safest and most profitable ways to invest. According to real estate guru Ken McElroy, that's because financial publications, tv and radio programs make the bulk of their money from advertising paid for by the very companies who provide such mainstream financial services. On the other hand, real estate investment is something you can do on your own–without a large amount of money up front. Picking up where he left off in the bestselling ABC's of Real Estate Investing, McElroy reveals the next essential lessons and information that no serious investor can afford to miss. Building on the foundation of real estate investment 101, McElroy tells readers:

Make your first million and earn a steady income with this updated, essential guide to real estate investing. The collapse in real estate prices from 2007 through 2012 was the most significant event in the real estate industry since the Great Depression. But today, with the real estate market rebounding, a new generation of investors is entering the field, eager to make their fortune. Building Wealth One House at a Time, 2nd Edition provides you with a practical way to create wealth through an ethical approach of buying, financing, and managing property. Renowned real estate expert John W. Schaub takes you through his 9-step program and explains how to accumulate one million dollars’ worth of houses debt free in any market, while earning a steady cash flow. This invaluable guide presents fresh strategies for buying and financing property, reflected in six new chapters on topics such as real estate cycles, financing real estate purchases, negotiation techniques, and retirement investing.

People throughout history have been making fortunes in real estate – in good times and bad! Read Equity Happens and discover not only what successful investors do, but how they think. Because how you think will affect what you do, and what you do will determine the results you produce.

Invest in Debt: The “How To” Book on “Buying Paper” for Cash Flow

Make your first million and earn a steady income with this updated, essential guide to real estate investing. The famous book from Jimmy Napier that will teach you more than just how to invest in debt.  Learn how to create cash from thin air!  This book digs deep and teaches you how to unlock the secrets of “paper” aka “notes” that will certainly help you build wealth on the fast track.

Starting Ugly is a timeless tale about change and innovation, told through the entertaining parable of Gregory Sharp. Gregory is a businessman who's youth was spent creating a very successful lumber business.  But as he continues to grow his company, he becomes blind to the practices and tools that helped him innovate.

Unable to see past his blind spots, Gregory is about to lose everything, until he comes to a revelation that his former employee, Jeff helps him see: that perfect execution is critical; but constantly innovating by starting ugly is vital to continual success.

Guide to Investing in Gold & Silver by Mike Maloney

The highly anticipated 2nd edition of the best-selling gold and silver investing book of the century. Completely revised, with over 100 entirely new pages of content.

The New Case for Gold by Jim Rickards

They say John Maynard Keynes called gold a “barbarous relic.” They say there isn't enough gold to support finance and commerce. They say the gold supply can't increase fast enough to support world growth. They're wrong. In this bold manifesto, bestselling author and eco-nomic commentator James Rickards steps forward to defend gold–as both an irreplaceable store of wealth and a standard for currency.

The Death of Money by Jim Rickards

The U.S. dollar has been the global reserve currency since the end of World War II. If the dollar fails, the entire international monetary system will fail with it. But optimists have always said, in essence, that confidence in the dollar will never truly be shaken, no matter how high our national debt or how dysfunctional our government.

James Rickards, the acclaimed author of Currency Wars, shows why money itself is now at risk and what we can all do to protect ourselves. He explains the power of converting unreliable investments into real wealth: gold, land, fine art, and other long-term stores of value.

Aftermath: Seven Secrets of Wealth Preservation in the Coming Chaos by Jim Rickards

Financial expert, investment advisor and New York Times bestselling author James Rickards shows why and how global financial markets are being artificially inflated–and what smart investors can do to protect their assets.

What goes up, must come down. As any student of financial history knows, the dizzying heights of the stock market can't continue indefinitely–especially since asset prices have been artificially inflated by investor optimism around the Trump administration, ruinously low interest rates, and the infiltration of behavioral economics into our financial lives. The elites are prepared, but what's the average investor to do?