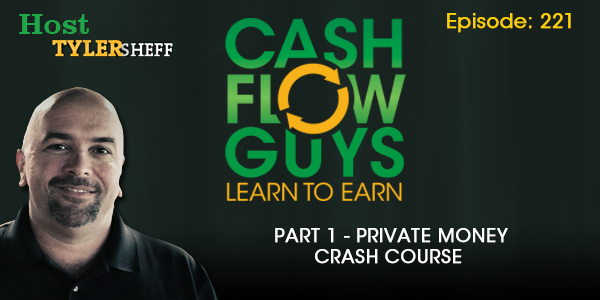 0.75x
1x
1.25x
1.5x
2x
0:00
0:16:24
Apple PodcastsGoogle PodcastsPlayer EmbedShare Leave a ReviewListen in a New WindowDownloadSoundCloudStitcherSubscribe on AndroidSubscribe via RSSSpotifyCheck out the podcast on iTunes
Subscribe to The Podcast

Today's episode is going to be a private money crash course.

In fact, I have a ton of info to share so I am going to break this up over a couple of episodes.

I posted on our Facebook group asking the members to share the struggles they face in raising money.

The post received several great responses which inspired this episode.

Below are some of the most common responses:

Self-doubt topped the list as the most popular reason.

By understanding how to structure a deal to be sure it is profitable eliminates self-doubt.

Many folks I run into don’t understand the “how” of deal structure.

Facts are, they don’t know what a good deal looks like.

Instead, they tend to judge a deal by its initial asking price and don’t go much farther than that.

A while back I decided to build a fix for this problem, you can get that fix FOR FREE at HowToMakeDeals.com

The free course is a four-part video program that helps busy people learn how to analyze deals fast.

Fear of asking for money was also a popular reason.

I remember struggling with this one quite often, for me it felt crippling.

Here’s the good news… If done right, you should never have to ask anyone for money.

Money should be asking to do business with you.

In my “Private Money Crash Course”, you will learn my secret system to pitch deals to investors.

Once you learn this system, you can use it over and over on any deal that provides income.

My method makes it easy to lay the cards on the table so that everyone can see what’s in it for them.

The end result is people asking you to consider helping them invest their money with you.

Fear of losing someone’s money happens by not understanding how the deal will support itself.

Lack of confidence in this area can rip you apart which is why I made the HowToMakeDeals.com free course.

If you have an overwhelming fear of losing someone’s money it usually means the deal is speculative.

Speculation is risky, but less risky when you understand the math and the source of data the math comes from.

In the post, fear of rejection came up which was also a big one for me.

Yet, if investors are coming to you asking for help investing their money, where is the rejection here?

Imposter syndrome is what many new investors feel if they have not yet completed a deal.

Another reason could be that their first deal tanked and thus they feel as if they are not “real” investors.

The best way to overcome the imposter feeling is to recruit experienced members to join you in your deal.

If you use an experienced partner, credibility increases immediately.

To learn more about my Private Money Crash Course, go to PrivateMoneyCrashCourse.com