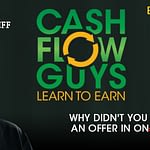 0.75x
1x
1.25x
1.5x
2x
0:00
00:18:06
Apple PodcastsGoogle PodcastsPlayer EmbedShare Leave a ReviewListen in a New WindowDownloadSoundCloudStitcherSubscribe on AndroidSubscribe via RSSSpotifyCheck out the podcast on iTunes
Subscribe to The Podcast

Why Didn't You Put An Offer In On It

Shoulda, Coulda, Woulda is something I catch myself saying often.  I try not to live in the past, but I find myself using it to motivate me to have a better future.

In 1992 I could have bought a house on the water in Madeira Beach, FL, needed a dock, needed yard work, but the inside was okay (livable). I was 22 years old and fresh out of the Army after 5 years of service.

Although as a Veteran I was entitled to a VA zero down VA home loan, I did not qualify for one due to my lousy credit at the time.  I passed on the opportunity all together because I figured the bank would simply say no.

It never occurred to me to simply ask the seller if they would take payments for their equity …even if it had occurred to me I likely would have dismissed that notion by assuming the seller wouldn’t do that for me.

I had the opportunity to buy that house for $75,000 (asking price) which would have meant a mortgage payment somewhere around $550 a month after factoring in taxes and insurance.

I later learned that someone bought that home for $65,000 with no money down, 20 year terms at 5% interest which for me would have meant a payment about $100 less than I had figured originally.

I passed on that because I thought it was too much hassle and responsibility to bother with.  In this episode, I dive into that notion and discuss what I learned from that mental lapse and also what I lost from simply not taking action.

That first house would have set me up nicely, even if it had not been such a great deal right out of the gate.

It took me many years to discover that what was really holding me back was fear of the responsibility of success.