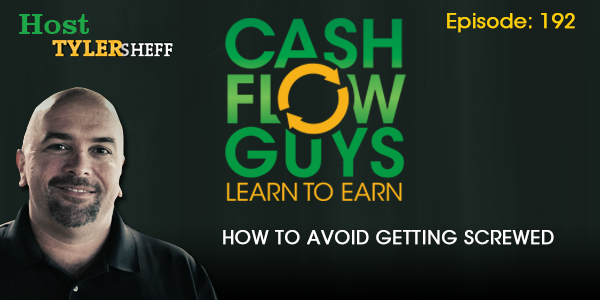 192 – How To Avoid Getting Screwed

0.75x
1x
1.25x
1.5x
2x
0:00
00:31:50
Apple PodcastsGoogle PodcastsPlayer EmbedShare Leave a ReviewListen in a New WindowDownloadSoundCloudStitcherSubscribe on AndroidSubscribe via RSSSpotifyCheck out the podcast on iTunes
Subscribe to The Podcast

How To Avoid Getting Screwed

Who are You Really Working With?  This is a question I think anyone should ask before they write any checks to anyone.

Lately, there has been quite a bit of rumbling in the background as some “deals” are not progressing as intended for some folks.  (Big Shocker) Some “popular” investment sponsors are being called to the carpet for investments gone wrong.

Lots of operators feeling pressured to do deals, just to do a deal and get money working.  This is no one's fault but their own.

It's not worth losing money to invest in a deal that cannot prove itself, by that I mean the deal must support itself.  You should understand all of the elements of the specific deal, most importantly, HOW it will produce revenue backed up by factual data to support the theory.

You should know each potential failure point and the remedy the sponsor has in place for that.  If you are the sponsor you should have people on your team to help you arrive at a list of solutions based on the data you have in front of you.

In value add opportunities, the method and means to add the value must be clear, data should support the deal sponsor's plans.  If the sponsor can’t prove where the returns are coming from with verifiable data, DON’T do the deal!

Watch out for wacky title search costs, due diligence fees, and acquisition fees.  Everyone needs to eat, but only after everyone at the table has been served.  This means that the sponsor’s payday needs to come AFTER the investor’s returns are determined and distribution has begun.  If the deal can’t afford both then the sponsor needs to suck it up since they were the ones controlling the deal (that’s the right thing to do).

You should know the flow…where your money is, how specifically it is being spent.  Don’t get sucked into the hype of urgency to do a deal, far too many sponsors are in a major rush to get deals closed.  When you are rushed, you will make mistakes, this I guarantee you.

Is there collateral in the deal you are about to invest in?  Or is this an unsecured loan or investment?  You should know the answer to this and frankly, I would avoid any situation where there is no valuable collateral for you to levy in the event the deal goes sideways.

Does this investment need to be registered with the Securities Exchange Commission? You should know the answer to this even if you are the one writing checks.  If the deal structure does fall under the SEC requirements and there is no proper structure in place as WHY.  Those who tend to walk the line of the law and look for ways around it are also the ones most likely to take unnecessary risks with your money.

← The Power of Cash Flow with Tyler Sheff 193 - Are You A Pirate or a Problem Solver? →