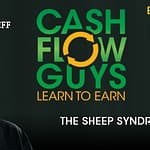 0.75x
1x
1.25x
1.5x
2x
0:00
00:24:10
Apple PodcastsGoogle PodcastsPlayer EmbedShare Leave a ReviewListen in a New WindowDownloadSoundCloudStitcherSubscribe on AndroidSubscribe via RSSSpotifyCheck out the podcast on iTunes
Subscribe to The Podcast

In this episode, I want to discuss a little something I refer to as the “sheep syndrome”. By that, I mean being a follower and getting yourself all wound up about current events (manufactured or otherwise) that slow down your progress. Don’t get into “sheep mode”, stop letting today’s headline keep you in financial jail.

The media serves no purpose but to serve the agenda of their master, like slavery. Today’s society is far too often influenced by less than accurate information that in many cases is put out to the people in order to purposely garner a planned emotion.

Investing in real estate is a people business which means we have to learn how to work with others who may share a different view than we do. To be successful in any business relationship we must focus on proactive communication in order to discover problems. Don’t get stuck in “deal brain” mode, it's not about the deal, it's about the relationship.

Everyone has problems, solve them and be rewarded, it is really that simple. Humans tend to be easily influenced by the thoughts, words, and actions of others. Sometimes we try to assume what the other part is thinking or act in a way hoping to gain the approval of the masses. When this happens, we wind up alienating the “other half” of society who has a different view than yours.

For me, I don’t bother sharing my views on anything controversial such as religion, race, sex, politics or anything else that can be volatile. I chose not to do this primarily because 1) I don’t think its anyone’s business and 2) I don’t really think anyone cares (or at least they should not care about my views on these topics) Gone are the days of intelligent debate, we now see our leaders and reports constantly talking over one another so much that we can’t even follow the conversation.

Instead of getting caught up on the hype, learn to be a good listener and when you do have something to say, it should be a question in order to learn more about the other party. By listening to understand you will likely uncover a treasure trove of solid information that can be used to structure great deals.