124 Listening in a Noisy World 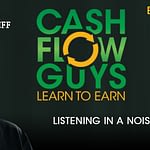 0.75x
1x
1.25x
1.5x
2x
0:00
00:30:22
Apple PodcastsGoogle PodcastsPlayer EmbedShare Leave a ReviewListen in a New WindowDownloadSoundCloudStitcherSubscribe on AndroidSubscribe via RSSSpotifyCheck out the podcast on iTunes
Subscribe to The Podcast

Listening in a Noisy World

Both your time and mine are valuable. So today we are just going to dive right in. We live in a very noisy world. There are sounds and distractions all around us that keep us from hearing what people are really saying.

Last week, I talked about why I deleted Facebook from my phone because it is such a distraction from the things we need to do. All around us devices are beeping, buzzing and making noise. They are keeping us from talking to each other.

Here’s an example. The other night I was at a restaurant and noticed and father and daughter, around 18, eating dinner. They were both on their cell phones and did not say one word to each other all night. That might have been angry with each other, but I really don’ think that was the case. I think it was another instance of social media invasion.

What inspired this episode is that I consult for a mentoring group. One of the members has the answers to everything. She talks so much and ends every sentence with “I knew that.” So you can’t tell her anything because she clearly has all the answers. However, she’s not where she wants to be in life and escaped the rat race. But she might never escape the rat race and become financially free because she simply can’t listen. It’s not possible for her to be quiet long enough to take in new information.

This is becoming a plague in today’s society. It’s an absolute epidemic of people who can’t stop talking long enough to learn or be educated on any topic. If you don’t listen to people and stop interrupting them, people will eventually stop talking and shut down because they interpret your actions as you feeling like they aren’t important to you and they don’t matter.

What type of negotiation can you have if you don’t listen? Everyone wants to be heard. You really need to take the time to listen and ask pointed questions based on what they are saying. This sends them a message that you were really listening to them and they are important to you.

Share with us the topics you’d like to hear on this podcast. Email your ideas to info@cashflowguys.com

If you want to join our next Mailbox Money Mastermind, go to CashFlowGuys.com/MMM.