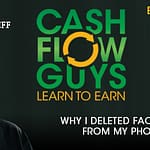 0.75x
1x
1.25x
1.5x
2x
0:00
00:31:34
Apple PodcastsGoogle PodcastsPlayer EmbedShare Leave a ReviewListen in a New WindowDownloadSoundCloudStitcherSubscribe on AndroidSubscribe via RSSSpotifyCheck out the podcast on iTunes
Subscribe to The Podcast

This week I want to talk about an epidemic that affects everybody, and that is social media addiction. Today’s society lives in a very noisy world, and the noise I’m speaking of has nothing to do with that which comes in your ears.

I recently deleted the Facebook app from my phone, because it simply became too much of a distraction for my taste.   You see, I have discovered that far too much of my day was invested in staying on top of things on Facebook.   I was that person that was lying to himself thinking that I needed to be on Facebook because that’s what was best for my business. When I looked inward and became honest with myself the reality was that I had a fear of missing out.

I have also recently learned that the addiction to social media that we all suffer from is fueled by dopamine, or more importantly the head of dopamine we receive when we get something in front of us to keep our brain busy.

Before I was able to delete the app completely I had to ask myself a very difficult question. The question was whether or not my time on Facebook was actually having a positive impact on my business. To test the theory I made no posts at all myself for two weeks. I quickly realized that I, Tyler Sheff, did not need to actively engage in social media it myself in order for it to have a positive effect on my business.

I have been on Facebook since day one and never once was able to see any tangible opportunity that relates to my business as a real estate investor on Facebook. I have seen lots of lies, gimmicks, posing, staging, and other ridiculousness but nothing that has had any positive impact on my business whatsoever.

For me, the straw that broke the camel’s back was in witnessing a post from one of my friends, where another person made a comment and then another person attacked that person for their comment which began a back-and-forth barrage that was nothing short of obnoxious and cruel.

Social media has turned what would normally be every day average people into borderline monsters.   Because I am a positive person I cannot be surrounded by constant negativity or obnoxious people, therefore Facebook had to go bye-bye. Below are some shocking statistics that you all need to take heed of:

Facebook’s own Mark Zuckerberg said that the average Facebook user spends 40 minutes per day on Facebook. That adds up to One Year and Ten Months!!

80% of time spent on social media happens on Mobile

In order for investors to get on board with what you’re doing, you have to be focused on one specific type of asset class. The problem with social media is it gives many people an opportunity to show exactly how distracted they are in reality. Oversharing is also far too common on social media channels, don’t kid yourself to think that people aren’t watching.

In order to be successful as a real estate investor you must be focused on one asset class because as we all know, a man who chases many rabbits catch is none. It is important to note that there is software virtual assistants and companies whose job it is to maintain a presence for you on social media. Instead of you wasting your precious time on social media you can simply delegate this task to one of those sources.