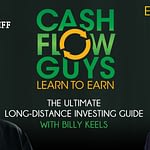 0.75x
1x
1.25x
1.5x
2x
0:00
00:43:12
Apple PodcastsGoogle PodcastsPlayer EmbedShare Leave a ReviewListen in a New WindowDownloadSoundCloudStitcherSubscribe on AndroidSubscribe via RSSSpotifyCheck out the podcast on iTunes
Subscribe to The Podcast

Today I am beyond excited to have my good friend and mentor, Billy Keels, joining me on this week’s episode. Billy is an American citizen who lives in Barcelona, Spain and INVESTS in the United States.

Even though he already has a successful career in the technology industry, Billy was looking for ways to replace his current income with passive income to spend more time with his wife and two sons. It was Billy’s boss who initially showed Billy that long distance investing was viable.

Billy initially wanted to invest locally, but quickly found out, however, that European charm came with a hefty price tag. He couldn’t find any deals in his local market that made sense! Then he realized, “Wait, I’m an American, I can invest in America!” and did just that.

Billy says “Appreciation doesn’t pay my bills,” and focuses on generating cash flow in every single one of his deals. Initially, he selected cities where he had family in who could check in on the investments every so often but quickly learned that wasn’t the best strategy for building his portfolio.

Next, Billy decided to create teams in areas that showed great potential and who could take care of the tenants efficiently. Once he had those teams assembled, he knew he could take on any opportunity that came his way.

Make sure you check out Billy at GrowYourMoneyTheSmartWay.com and download his FREE ebook! You’ll also find fantastic informational videos on his website, KeeponCashflow.com.

You can also book a FREE consultation with Billy at http://meetme.so/keeponcashflowsession

There are only a few days left to register for the Mailbox Money Mastermind! Make sure to sign up now at http://CashFlowGuys.com/MMM

Join our Facebook group if you haven’t already at http://CashFlowGuys.com/Group

This website uses cookies to improve your experience while you navigate through the website. Out of these, the cookies that are categorized as necessary are stored on your browser as they are essential for the working of basic functionalities of the website. We also use third-party cookies that help us analyze and understand how you use this website. These cookies will be stored in your browser only with your consent. You also have the option to opt-out of these cookies. But opting out of some of these cookies may affect your browsing experience.
Necessary Always Enabled

Any cookies that may not be particularly necessary for the website to function and is used specifically to collect user personal data via analytics, ads, other embedded contents are termed as non-necessary cookies. It is mandatory to procure user consent prior to running these cookies on your website.